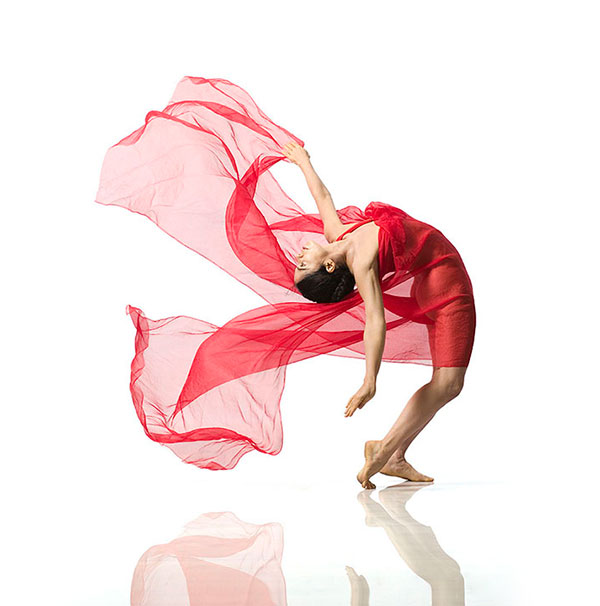 "Through my art, my goal is to reveal the transcendent through images which focus on the human body as a vehicle of transformation. I am specifically defining a universal art which touches the evolutionary traces embedded in human experience and transcends the limits of race, nationality and gender placed on us all in an aim of discovering what is truly universal about being human."

Maureen Fleming Company, an internationally acclaimed interdisciplinary performance ensemble, 'gives birth to a new vision of the body' (Ballet Tanz International). Under Fleming's direction, the company includes a core of collaborative artists including: Christopher Odo, an eclectic artist, dancer, designer, videographer and photographer, has worked with Maureen Fleming Company since 1993 in the U.S., Europe, Asia and Russia and was in the original Tony award-winning M. Butterfly on Broadway. Bruce Brubaker, a pianist presented by Carnegie Hall has performed with orchestras throughout the U.S. and has toured Europe, South America and Asia. He received Juilliard’s highest award and joined the faculty in 1995 and is chair at Boston’s New England Conservatory Brett Jarvis sound designs include: NY Shakespeare Festival; Roundabout Theatre; Joyce Theatre, Bill Irwin’s Mr. Fox: A Rumination, Mark Dendy’s Dream Analysis; and the Off Broadway production of Avenue Q.

Maureen Fleming was born in Japan. After extensive study in Japan with Kazuo Ohno, co-founder of buto, an avant-garde movement developed in post war Japan, Ms. Fleming went on to perform with his son Yoshito Ohno and to tour internationally with performance artist and choreographer Min Tanaka. Fleming continued her training in the United States as a scholarship student under the Cecchetti master Margaret Craske. In 1984 she became an artist-in-residence at La MaMa ETC in New York and has conducted residencies at NYU’s Tisch School of the Arts, The Irish World Academy, NUI Galway, Brown University,  RISD, The Seoul Institute of the Arts and The Juilliard School.

Fleming’s Dances From Home Installation involving choreography for photography was commissioned by La MaMa founder Ellen Stewart and presented at La Galleria in NYC in 2009 and by the Project Space Gallery at S.U.N.Y. in 2010. O Black Madonna Installation was presented at La Galleria in conjunction with the NY premiere of ‘B. Madonna’ at La MaMa in N.Y.C. in 2013. Following the La MaMa NYC world premiere in 2013, The O’Shaughnessy presented the Midwest premiere of ‘B. Madonna’ and 'O Black Madonna' Installation as a 2015 Women of Substance Event, followed by the CRASHarts Boston premiere in 2017 at the Institute of Contemporary Art and the Riga Performance Art Festival 2019.

Christopher Odo (Designer/Performer) has worked as a designer and performer with Maureen Fleming Company in the USA, Asia, Europe and South America. Designs and performances include New York’s City Center Fall for Dance Festival, Jacob’s Pillow Festival and festivals in Italy, Mexico, Iceland, France, Germany, Russia, and at La MaMa E.T.C., Cleveland Museum, Virginia Museum, Emerson Majestic Theater and Institute for Contemporary Art in Boston among others. Before joining Maureen Fleming Company he performed with butoh artist Min Tanaka in Delphi, danced with Solaris/Lakota, a cross-cultural project with Native American artists in the USA, Africa, France and Sweden. He performed Puck in A Midsummer Night’s Dream at the Public Theater and Lincoln Center Institute and danced in the original Tony award production, M. Butterfly.

Colm Mac Con Iomaire (Composer/Violinist) is a Multi instrumentalist Composer from Dublin. He is a founding member of the internationally acclaimed Irish band The Frames. For the last 25 years they’ve toured internationally and to sold out venues all across the world. Colm released his first solo instrumental record The Hare's Corner in 2008 to critical acclaim. The follow up album this April, And Now The Weather, was an Irish top Ten. He toured the record in USA, Australia and Europe. His music draws on a wide range of styles and influences ranging from classical to traditional, though his music has a unique sound all of it’s own. Colm writes for feature film, contemporary dance, animation, television and theatre. Colm tours as a composer with a full band and also a solo artist. His music for the animated short film, Late Afternoon, was nominated for a 2019 Academy Award.