By SHEILA REGAN Special to the Star Tribune 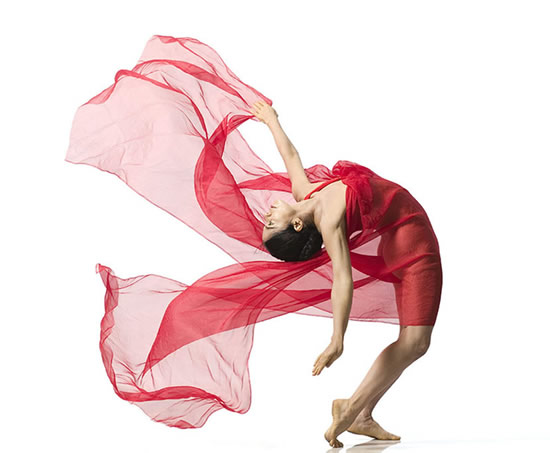 Maureen Fleming's "B. Madonna" at the O'Shaughnessy in St. Paul on Saturday left audiences with the question: Is Maureen Fleming human? Though she certainly appeared human when she gave her final bow, the show was filled with evidence that would lead one to believe otherwise.

At moments, her body transformed into something resembling soft clay, twisting and spiraling in contorted configurations. She was also apparently able to fly, and generally had an otherworldly presence.

"B. Madonna" interprets the myth of the goddess Persephone, daughter of Zeus and Demeter, who is abducted and raped by Hades and taken to the underworld. Fleming juxtaposes this myth with the mystical and divine feminine energy of the early Christian Black Madonna. The character Fleming portrays is both victim and all-powerful deity. Even as her body was engulfed in red silk hanging from the ceiling as she was ravished by some invisible force, she channeled a carnal power, her strength accumulating as she illustrated her soul in free fall.

Fleming, born and raised in Japan and currently based in New York, also brought into the work her own experience of trauma. As a young child, she was in a car accident where she flew through the windshield of her mother's car after they hit a bicyclist. In its slow-moving intensity, Fleming's work embodied excruciating moments of agony, drawing on imagery both mythical and intensely personal in scope.

Fleming's collaborators in "B. Madonna" include Philip Glass, who composed much of the music, and playwright David Henry Hwang, but it was contributions by Fleming's longtime collaborator Christopher Odo that elevated the piece to startling brilliance.

Odo's visual design takes a vertical approach, with many of the most dramatic moments performed on elevated platforms, lofty staircases and in one case, a costume piece that doubled as a set, making Fleming appear to be a giantess with a skirt that draped down over the scaffolding where she stood. Odo also collaborated with Jeff Bush on a video in which images of the human body morph into ghostly shadows, echoing Fleming's ability to distort her body into an abstract medium. Odo performed in the work as Hades, demonstrating such skills as standing on his head and dancing with swords.

The work never quite made the case for Fleming's premise, that the Black Madonna and Persephone belong to the same lineage, in part because Persephone's story, along with Fleming's own memories, took up most of the narrative. However, the work sang with a transcendent emanation.